Nature Therapy: What is it, and Why Do We Need It? 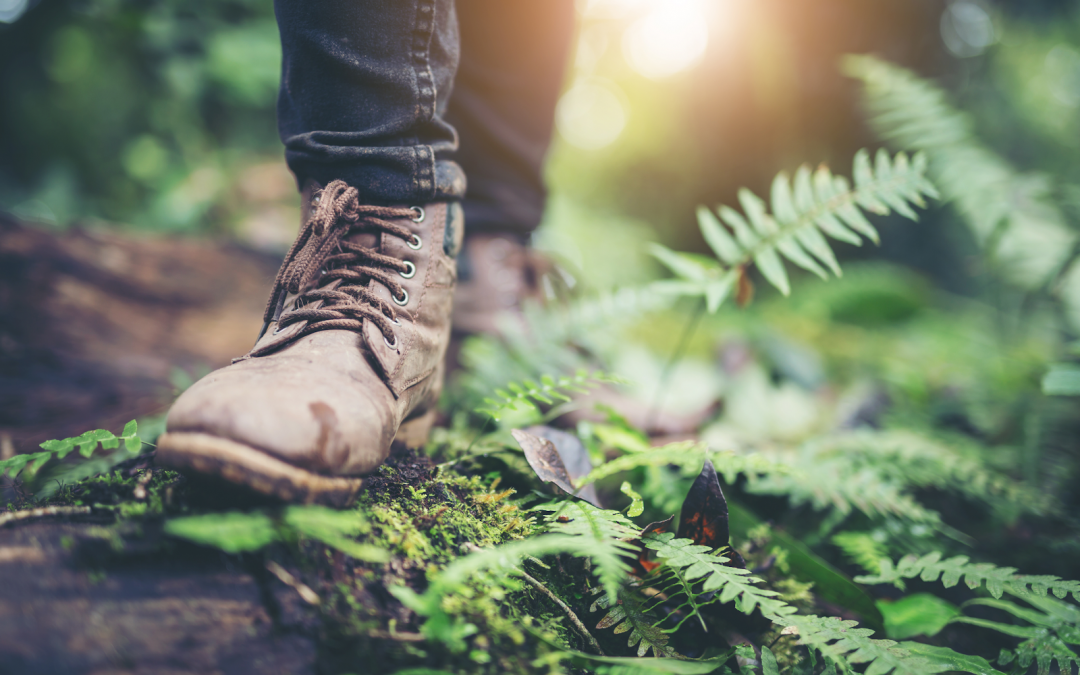 Nature Therapy. These two words almost seem to be opposites. Nature is, well, natural. Nature is all around us. It is effortless, it surrounds us. It is spontaneous, healthy. In contrast, the word therapy seems a bit abrupt. It sounds man-made, scientific, prescribed, researched and regimented. Even though these words may seem at odds with each other, Nature Therapy, sometimes called Ecotherapy or Wilderness Therapy, is a real and growing way of healing.

Underpinning the entirety of Nature Therapy are two ideas. The first is that in modern society, we are indoors a majority of time and therefore disconnected from nature. For example, most people in society do not get involved directly in the process of gathering or harvesting food, or even building their shelter or any other act that would have them directly interact with the Earth. Because of this disconnect, we have more problems with mental issues such as negative mood and emotions, motivation, anxiety, depression. A disconnect from nature can also be a contributing cause of health issues such as higher blood pressure and heart rate, and lowered immune system.

The second idea is that if we can find ways to consciously and regularly reconnect with nature and get people connected to their natural environment, that natural environment can have therapeutic benefits for them mentally and physically. This is the goal of Nature Therapy

Why Do We Need Nature Therapy?

If being in nature is considered therapeutic, you could say that humans have been doing some form of Nature Therapy for millenia. For most of human history humans have lived closely connected to the land. It is only in the last few hundred years, with the advent of the Industrial Age and the undeniable ubiquitousness of technology, that we have retreated to indoor environments more and more as the decades progress. We have become disengaged from nature, and isolated inside cocoons of our own making. Being indoors seems to have some potentially bad side effects to our health.Two of the areas that have been studied are the effects of conditioned air indoors, and the effects of natural versus man made light sources. .

Just how much time are we spending indoors? According to one recent study by the Environmental Protection Agency (EPA), Americans spend 93% of time indoors or in a car. Fully 87% of the average America spends their life inside a building, then another 6% of of their lives is spent inside automobiles. If you’re doing the math, that means that the average American spends only 7% of their life outdoors, which comes to about 12 hours a week, or one half day each week. That isn’t much, especially compared to the primitive, rural, living-off-the-land type of existence that humans have been living for the vast majority of their time on this planet.

Being indoors and breathing filtered, conditioned air instead of outside in nature has actually been shown to have deleterious effects on human health.The conditioned and filtered air In our artificial environments actually has more pollutants that fresh, natural air. Amazingly enough, the average adult breaths in about 4000 gallons of air each day. According to a recent study, indoor air can be up to five times more polluted than natural, fresh air outdoors.

The man-made light sources we are exposed to do not take into account our biologically deep connection to sunlight and regular light/dark cycles to help regulate our circadian rhythms. Circadian, from the two root words “Circa” meaning “about or approximately, and Dia from the root word meaning day. So Circadian Rhythms are our “About Daily” Rhythms. We are biologically predisposed to syncing with natural cycles of light and dark. These natural cycles even affect our sleep rhythms, which can in turn also affect our memories. We all should experience 3-5 episodes each night of what is called Rapid Eye Movement, or REM, sleep. It is during REM sleep cycles that memories get sorted, stored and organized. REM sleep also stimulates the brain regions used in learning. In one sleep study, participants who learned a skill and then were deprived of REM sleep could not recall the skill upon awakening. REM sleep may be vital for normal brain development during infancy. This could be a reason why babies spend so much more time in REM sleep that adults.

So artificial light and a change in natural light.dark cycles could affect our memories and development, and in more severe cases, lack of sunlight can cause severe respiratory disorders, or a condition called Seasonal Affective Disorder (SAD). A YouGov report noted that approximately 15 percent of the world’s population. This disorder, which sometimes called winter depression, can drastically affect your moods and emotions.

It seems evident that we are paying a price for being disengaged and removed from the Earth. Being outdoors in natural settings and surrounded by nature seems to be affecting human mental and physical health to an alarming degree. Surprisingly, this phenomenon of being disengaged from nature has long been observed, but has only been studied and researched in the last few decades. As far back as 1901, naturalist and champion of America’s National Park system John Muir wrote, ““Thousands of tired, nerve-shaken, over-civilized people are beginning to find out that going to the mountains is going home; that wildness is a necessity; and that mountain parks and reservations are useful not only as fountains of timber and irrigating rivers, but as fountains of life. Awakening from the stupefying effects of the vice of over-industry and the deadly apathy of luxury, they are trying as best they can to mix and enrich their own little “ongoings” with those of Nature, and to get rid of rust and disease.”

One of the most popular forms of Nature Therapy is called Forest Bathing. Forest Bathing began in Japan in the 1980’s, and is now regularly used for preventative health care and healing. If you go on a Forest Bathing Walk with a certified Forest Bathing Guide, you would meet them at a predetermined location for introductions and an overview. The rest of the Forest Bathing walk would of course, take place in a forest or other natural area. A typical walk lasts around two hours. In that time, the guide might lead you on a guided meditation to increase your mindfulness of the sights, sounds, and even smells of the natural world around you. You may also have time to quietly explore, reflect and discover on your own as you reconnect with nature at your own pace, with guided group discussions at several points along the journey to assist everyone to process what the group is experiencing together.

There has been much research done over the past several decades, mainly in Japan and Korea, on the benefits and healing effects of being in natural areas. One of the exciting example of this research is the finding that many trees secrete organic compounds that support what doctors called our Natural Killer cells or NK cells. These cells are a vital part of our immune system, and help us fight off disease, even cancer. The participants in one study took a 3 day-2 night journey into the forest. Blood was sampled on days 2 and 3, and then after the trip for up to 30 days. There was an increase in NK cells that lasted up to 30 days after the trip. Tourists to the city for the same amount of time had no increase in NK cell production at all.

There are also research findings that support being in natural or wild areas can have a host of other benefits as well. These benefits include reduced stress, improved mood, reduced blood pressure and heart rate. Energy levels have also been shown to improve, as well as better sleep and a greater ability to focus. Those are some of the measurable physical and mental health benefits. There are some benefits that have been reported and researched, but are perhaps more difficult to quantify. For example, practitioners of Nature Therapy have described developing a deeper and more clear intuition and greater sense of overall happiness in their lives.

There are personal benefits to being in nature, but there are also interpersonal benefits as well. A series of studies done in Chicago suburbs seem to indicate that the residents in the public housing buildings that had more trees and natural green space that was around buildings reported that they knew more of their neighbors and had a stronger feeling of being connected and united with other residents, and also were more concerned about their neighbors and wanted to help and support each other more. The study also revealed that those buildings with more trees and green spaces also had reduced risk of street crime and lower levels of domestic violence and aggression.

The science behind these findings was explored by use of fMRI scans to measure brain activity. Incredibly, the studies found that when participants viewed scenes of nature while being scanned, the parts of the brain that are responsible for feelings of love and empathy were active. When the participants viewed urban scenes, the parts of the brain associated with fear and anxiety had more activity.

As we continue to become more industrialized and engaged in isolated interactions one-on-one with technology, we are becoming more distant from our roots in the natural world. We seem to be paying a price for being in a man-made world of steel, glass and concrete instead of living and interacting with the land, connected to the Earth. The artificial light and conditioned air are playing a part in disrupting our natural cycles and weakening our connection with nature. Even the advent of social media has the effect of making us all potentially available and on call 24 hours a day. This is yet another way we are disengaging from the natural light and dark, sleep and rest cycles of nature. But all is not lost. Nature Therapy has shown great promise and benefits to helping us find a balance again. Through Nature Therapy, a trained Nature Therapist or Forest Therapy Guide can help reconnect you to nature, and the natural rhythms, air, light, sights and sounds that we need.

Find a Walk Find a Guide

Languages »
Welcome to Forest Bathing Finder! We use cookies to provide you with the best possible experience on our website. If you continue to use this website we will assume that you are fine with that.OkPrivacy policy